What Happens as Potable Drinking Water Systems Age?
Over time, metal pipe corrodes from contaminants and chemicals in the water as well as the pH of the water and the water chemistry employed by the utility. This corrosion leads to pitting, pinhole leaks, and finally catastrophic failure. In plastic piping, resins break down from prolonged exposure to chemicals added to the public water supply to ensure health and safety, such as chlorine and fluoride. These breakdowns can lead to spectacular failures and flood damage. 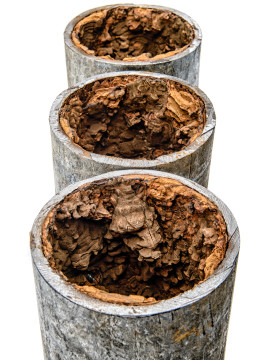 Higher water bills signal the possibility of leaks in areas that may not be visible, such as under concrete slabs or underground. Once leaks start, they tend to accelerate. Leaking pipes decrease a property’s value and often require replacement as a precondition of sale.

It’s always a good idea to replace pipes before problems become too costly. The combination of higher water bills, repeated plumbing repairs, and property damage from leaks can easily exceed the cost of a repipe over time. One SageWater client estimated the indirect costs of old pipes at nine times the cost of repairing leak damage.

In addition to age-related issues, defective products have led to class action lawsuits against manufacturers for issues such as stress fractures in polybutylene and dezincification of yellow brass fittings.