The Problem with Polybutylene

A plastic resin used in manufacturing pipes and fittings from 1978 to 1996, polybutylene (“poly” for short) materials were installed in up to 10 million single-family homes, low-rise apartments and condos throughout North America.

The longer polybutylene is in use, the greater the risk of serious complications. Common water additives such as chlorine attack poly pipes and fittings, leading to cracking. Left unaddressed, polybutylene cracks can result in catastrophic property damage from flooding, mold infestation from undetected leaks, higher premiums, or even cancelled coverage.

Most insurers and financing entities require polybutylene pipe replacement as a condition of new commitments. Typically, real estate professionals on the front end red-flag properties that have polybutylene and leave it to buyers and sellers to negotiate the terms of its removal. Often, poly pipes must be replaced as a condition of the sale. Mortgage lenders are steering clear of poly-piped properties altogether.

Does your property have polybutylene pipes?

Interior polybutylene pipes are typically gray and visible by water heaters, sinks, and toilets. In some cases, a combination of poly and copper was used, so even though you may see copper pipe, polybutylene may still be in place behind walls, ceilings, and foundations.

Will your pipes fail? 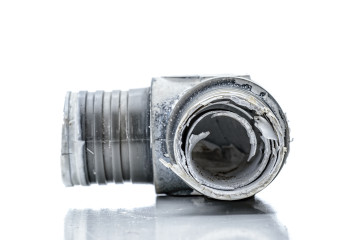 There’s a common misconception that if your poly pipes haven’t leaked yet, they never will. Not true. The longer the use, the greater the risk of serious complications. If your property was built between 1978 and 1996 and has four stories or fewer, it may still have poly pipes.