SageWater was recently highlighted in a featured case study by Uponor, a preferred provider of PEX piping solutions.

We often think of a facelift as an external beautification tool, but in the case of a 184-unit Lafayette, LA
apartment complex, it’s what we can’t see that needed the biggest makeover. The building’s plumbing system had suffered from leaky pipes for quite some time when the owners decided to replace the outdated polybutylene piping with PEX tubing from Uponor.

They hired SageWater, a Virginia-based company specializing in pipe replacements, to complete the job. SageWater, who operates nationwide, has installed over 32 million feet of new pipe in more than 85,000 existing (and occupied) apartments and condominiums across the country over the last few decades.

In order to keep tenants in their apartments during the repipe job, SageWater workers took great care in managing the process to minimize interruptions and ensure comfort. At the end of each workday, affected tenants had the water turned back on in their units and workers removed protective plastic put in place each morning to keep apartments clear of dust and dirt.

And since Uponor offers PEX in long coil lengths, the installers were able to run 300-foot coils versus the 20-foot CPVC maximum lengths, ensuring faster installation times and fewer fittings (thus reducing room for mistakes). “Also, CPVC requires more cuts and therefore more fittings,” Nelson said. He and his crew have worked with PEX over the last several years, but are still impressed with its tight bend radius and the ease of adding ProPEX® fittings using the Milwaukee® tool. “In my experience, once the fittings are on, they don’t leak or break,” Nelson said, “and PEX is easier and faster to install than any other alternative product out there.”

The crew from SageWater provided a turnkey installation with the least amount of disruption to the tenants. It’s a balancing act to work around tenants’ essential comforts and the need to install the new pipe (cutting into ceilings and drywall for access), and then to repair and paint after the completion of work. “We do a lot of repipe jobs,” Nelson said, “and we are comfortable balancing all the elements involved so the job is done quickly, correctly, on time and within budget.”

The project took about five months from start to finish (typically running about two workdays per apartment unit) and six professionals to complete the various jobs needed for a proper and professional installation. 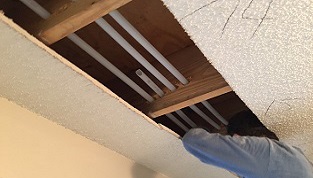 Reproduced with permission from Uponor.

…at your next industry event. Say hello and discuss the benefits of SageWater pipe solutions.

Sign up for our free newsletter.
Receive helpful information on pipe replacement and news about pipe problems.